Creating a culture of evidence at Odessa College (OC) was the result of deliberate change within the institution. “Our president and board of trustees made a conscious decision to become more data driven,” says Don Wood, PhD, Dean of Institutional Effectiveness. “And it was that decision that led, first and foremost, to the relationship between Odessa College and ZogoTech.”

Before ZogoTech, OC was relying on data extracted from their student information system, Datatel Colleague. The process was time consuming and limited both the amount of data available as well as the number of people who could access it. “We were making decisions based on much more limited information,” explains President Gregory Williams, PhD.

“Knowing that we were not as data driven as we could be is what made us enthusiastic about ZogoTech and the capabilities it would afford us,” continues Williams. And with ZogoTech’s data warehouse and business intelligence tools, the college began to consult the data at every turn. Hoping to raise course retention rates, OC closely examined the patterns and interventions that lead to student success. Using the data and narrowing down those strategies, they rolled out the best practices to the entire institution.

In another instance, OC used fine-grained filters to identify students who were close to graduation and reached out to them to keep them in class. In one request,  OC needed to identify students who had at least 45 credits and fewer than 60 credits who had been enrolled in Spring ‘12 but who were not yet enrolled in fall. “In order to encourage them to continue with their education, we decided we could offer them a 20% tuition reduction,” explains Wood. “Working with our marketing team we sent emails to each of those students to let them know about the reduction.”

The access to data from various sources, now all stored in a secure and central location, enabled OC to identify these students, and the results of the email campaign were significant. “We sent out the emails 3 weeks before class, and by the first day of class we had 40% of those students enrolled and ready to go,” says Wood. “That was a huge step for us in terms of being data driven, reaching out to students who themselves may not have known how close they were to getting a degree and letting them know they could have this tuition credit. The real beneficiaries of this data use were really those students, and ultimately, they are the reason we’re making these changes in the first place.”

It’s practices like this that the college hopes to expand. “Our goal is to get to know as much as possible about everything that we do. We want to know as much about our students as possible, including where they started in higher education, where they’re going, and how they’re progressing,” says Williams. “At the same time we want to know about the effectiveness of our institution and if we’re really preparing our students for success. ZogoTech has allowed us to use the data to assess that, and to refine the way we look at our own accountability. That’s the wonderful thing for me. It gives me more information and a better sense of where we’re headed. And that’s how it should be in all of higher education, we should not only make statements, we need to have data to prove that our actions have really meant something.”  With a view to high level dashboards and the ability to drill down on problem areas, ZogoTech gives executives consistent reports on progress from both administrative and academic groups. This display of critical information can also be correlated to key performance indicators (KPIs), ensuring that all progress is related to strategic goals and benchmarks.

At OC, further determining and refining that progress is reliant not only on many colleges using data to improve decision making, but also on the ability to share that information between institutions. “In education, there are enormous numbers of folks at other colleges that are trying to do what we’re doing. Without data to compare ourselves to what others are doing, we would never know what progress was,” says Wood. “We need to talk about actual outcomes as we have measured them at each of our colleges, and we need ZogoTech in order to understand that. Without the data, we would have no real way of having that conversation, of assessing which program was more successful than another. If you use metrics the right way, they are the ultimate language of success and if you can’t speak that language you have no way to improve yourself, you have no way to compare yourself to others, and you have no way to tell if you’re being successful.”

Delivering better access to end users has been an incredible time-saver for IR as well as a significant benefit to the college on the whole. Dr. Williams, for example, is now able to put that data to use, managing programs and improving processes across the entire institution. “Part of Achieving the Dream or other programs that we work with are about having honest conversations, and in order to have an honest conversation you have to have data, you have to have those numbers to be accountable. You have to be honest about what you’re accomplishing and what you’re not accomplishing, and ZogoTech helps us garner that information, bring it to the table, and make it a part of the conversation.” The results of this conversation mean that everyone on campus is empowered by the success evident in the data, and motivated to continue improving where changes still need to be made. 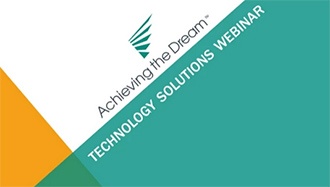 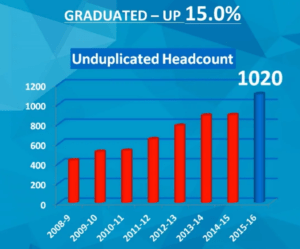 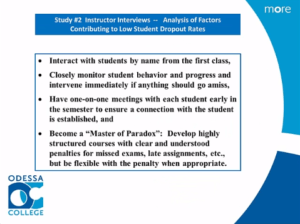